Barrie has been a professional cyclist for 15 years, racing at the highest level and travelling the World with mountain biking, road racing and cyclo-cross.  He raced with many of the mountain bikers that have turned to Tour de France stars including Evans and Hesjedal.

He won 5 Elite National titles in the 90s at cross-country mountain biking and cyclo-cross, not to mention numerous national series titles, the “King of the mountains” in the Milk Race and Manchester Commonwealth Games.

These days Barrie does challenge events that takes his fancy. A regular at the Yorkshire 3 Peaks Cyclo-cross. In 2011 he did the Keswick to Barrow (40 mile) run and the Fred Whitton Challenge on the same weekend.

Barrie has been guiding for Tina and Paul since 2001 on both corporate and charity events. Amongst this are; Lands End to John O’Groats; mountain bike C2C; London to Paris; Wembley to Berlin; London to Cologue; JOGLE relays events as well as tours in Italy, France and Spain. 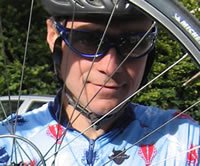