Ian has a full military career behind him as well as 12 years of running his own cycle business.  This background has provided him with an array of outdoor opportunities and experiences; from gaining his Hang Glider pilot licence, rock Climbing and Abseil Supervisor qualifications to running a British Forces Youth Club in Cyprus and competing as an athlete up to National levels

In his earlier years he excelled as a sprinter on the track before progressing to the longer distance endurance events.  After taking up Triathlon in the mid eighties he moved up to full Ironman distance.  After completing his firs,t he vowed never to do another!  However in recent years he has since completed a further five Ironman events.

Ian is always up for personal challenges and knowing that anything is possible if you really want it, is happy to do anything to assist others in achieving their own goals. 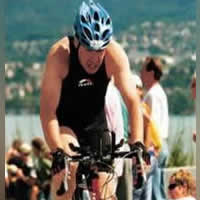