Steph started life as a rower, totting up 3 youth Olympic golds and many other titles, and only discovered cycling as  part of her daily commute involving an 18 mile ride, each way, to rowing practice. Having competed in triathlon and gained silver at the age group worlds Steph decided she was better suited to sitting down sports and turned to road racing.

In 2017 Steph rode in the National Womens Road Series. During the final round at the Ryedale Grand Prix, she broke off from the front of the pack on the second lap only to be caught with only 8 kms to go. She earnt the coverted Daily Beast award for her efforts on the Ras Na Mban stage race in Ireland.

She now enjoys 24 hour time trials and endurance racing with a few big challenges in the pipe line. She loves helping others enjoy cycling as much as she does, and is a student sports masseuse and sports nutrition adviser. She’s also partial to a good bit of cake, having had her own cake business, and when not cycling can be found rock climbing and mountaineering. 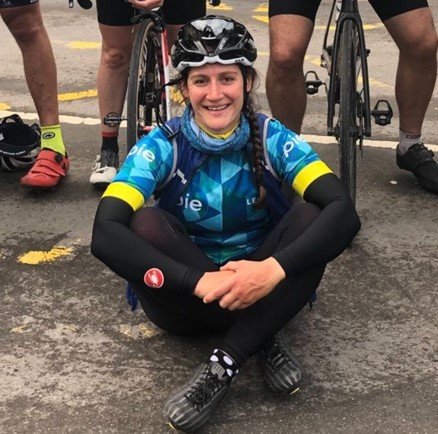