I am a relatively recent convert to cycling having taken it up seriously in 2004 when running marathons was not only getting harder but sadly getting slower too. Since 2004 I have taken part in events all over Europe including the Etape in 2010 through the Pyrenees, as well as completing 2 Land’s End to John O’Groats rides in 2011 and 2012.

Sport is my passion and since retiring from Unilever in 2009 I have had the luxury of time to dedicate to it. In 2009/10 I completed the YMCA Fit course to qualify as a personal trainer feeling it was important to have an informed view of training rather than relying on simple enthusiasm.

I have worked as a guide for pie on a number of events in the UK and on Paris to London rides, and whilst I may not be the fastest on 2 wheels I get a tremendous buzz from riding with groups and hopefully people have a good time riding with me. 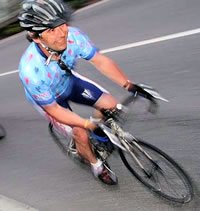